The time: 1880. The place: Lockwood’s Opera House over the dry goods store in the little prairie town of Northfield, Minnesota. Share laughter and tears with the settlers and get a taste of entertainment in early opera houses. Includes some of Minnesota’s earliest music, arranged by Minnesota composer Daniel Kallman. Large cast musical appropriate for middle school, high school, or community theater. Unison and 2-part voices, piano, opt. violin. Available in one-act or two-act versions. Duration: 60 or 90 minutes. https://www.facebook.com/pages/Workhouse-Theatre-Company/132498646789172 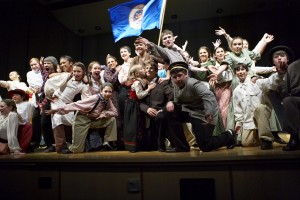 Lockwood’s Brightest Stars was premiered on April 11, 2008 in Northfield, Minnesota, by a cast of students from the Northfield Middle School under the direction of Rachel Haider. The project was funded in part by a Southeast Minnesota Arts Council Artist-in-the-Schools Grant and a Minnesota Sesquicentennial Grant from the State of Minnesota. The script was written to offer many interesting roles (rather than just a few lead roles), with large chorus numbers, solos, non-singing roles, and dance. The script was not simplified for the middle-schoolers so, while it is very accessible to this age level, it is very appropriate for adults or mixed ages.

A shorter, one-act version of the play is now available. (Duration: 60 minutes.)

It is March 30, 1880 in the little prairie town of Northfield, Minnesota, only 25 years since its founding. Division Street is awash in mud as your carriage pulls up in front of Lockwood Dry Goods Store. It’s been a long winter, the wheat prices are falling, and some loved ones have been lost to diphtheria. But tonight you will find happiness and a great deal of camaraderie at Lockwood’s Opera House, an unassuming room above the dry goods store which since 1872 has been a center for civic engagement, social interaction and artistic expression. Here you have seen countless performances by traveling troupes from the east coast and Europe (including the midget General Tom Thumb), lecturers such as noted geologist William Denton, musical performers from afar and from right here in town, and community events to raise money for charities. You are especially excited because Lockwood has recently renovated the opera house to improve seating and ventilation. The first use of the new space will be tonight’s performance of “All That Glitters Is Not Gold” written by British playwrights Thomas and J. M. Morton, and performed by the Northfield Amateur Dramatic Club.

As I did research for this play, poring over old newspaper articles, journals, diaries, music scores and programs, indistinct ghosts from the past began to take on vivid detail. I found Ephraim Lockwood (who owned the building now occupied by Present Perfect, Swag, and the HideAway), the Old Settlers (probably a bit more dignified than they appear in this production), the Northfield Amateur Dramatic Club, Women’s Christian Temperance Union, the Prohibition Club, and St. Olaf music teacher May Martin. I found a city (population 2,299) buzzing with activity: civic discussions and debates, historical groups, theatrical presentations, lectures, musical concerts and recitals, book readings, charitable productions. Just like the Northfield of today! It is no surprise that our community was then and is now a center for education and the arts, as these were central values of John and Ann North and the other founders. There are many things I don’t know about Ephraim Lockwood and his fellow townspeople. I have taken great liberties with situations and characters in the creation of this play. But I hope my fictionalized version of the events of March 1880 resurrects the spirit of community and concern for the commonweal that I found everywhere in my research. Tonight you will hear music with some of the earliest connections to the state of Minnesota, adapted and arranged by Northfield composer, Daniel Kallman. These pieces give testimony to the lives of the settlers, and it’s appropriate that we hear and enjoy them in this the 150th year of the State of Minnesota.

The talented cast of Lockwood’s Brightest Stars have been a joy, and I would like to thank them for all of their efforts. I would also like to thank Chris Ganza, Jana Schomburg, Neil Rowley, and Dan Kallman for their excellent work. I am especially grateful to Rachel Haider for her boundless enthusiasm, patience, and great skill in bringing this all to life.

The following excerpt, from the January 13, 1881 Rice County Journal, is part of a letter from Northfield founder John North, who at that time was residing in California. This quote sums up North’s feelings about working for the common good: “But the slavish part comes in hoarding, holding and guarding the surplus accumulation. I have often wondered that our millionaires never seem to understand what ‘watchdogs’ they have made of themselves, in standing for life guarding their pile, simply to prevent anybody from being benefitted by it. . . . How much grander the life, and how much happier and successful is the career of one who fills his whole life with useful work and generous deeds; who carries with him an atmosphere of light, and love, and sunshine that blesses all and brings sorrow to none. The young man just starting in life has the choice of these two ways. How many of them will choose the right one?”

September 2021: “Remembering for You”, Christine’s poem looking back at the year 2020, was included in an anthology entitled This Was 2020: Minnesotans Write About Pandemics and Social Justice in a Historic Year. The collection, published by the Ramsey County Library (MN), won the Minnesota Author Project award in the Communities Create category. The book is available from bookstores, or can be read free at:  https://mlpp.pressbooks.pub/thiswas2020/

January 2021: A new radio play by Christine is now featured on radiodramas.net, a recently launched web destination for radio scripts for all ages. The Mad Adventures of Mavis Montero: Mummy Mania is the first in a series that Christine will write for middle school and older.

April 15, 2020.  Christine read her poem  “Beyond Sight”  on the Northfield (MN) Public Library Instagram feed. This poem was one of the winners of the 2014 Sidewalk Poetry competition in Northfield, Minnesota.

April 13, 14, and 20, 2019, at the Broad Institute of MIT, Cambridge Main Library,  and Peabody School (Cambridge, MA) : “Earthrise” and “Einstein-Rosen Bridge Strut,” two songs with lyrics by Christine Kallman and music by Daniel Kallman. The songs were performed as a part of One Whole Step for Man: Songs of Space Travel.

Friday, March 1, 2019. Christine was invited to read two poems, “The Garden” and “The Most Difficult and Best” for Writers Night: Resilience and Sustainability, a juried event at Content Bookstore in Northfield, MN.

Christine had a monologue published on the website Non-Binary Monologues (Monologues for Non-Binary Actors) https://nonbinarymonologues.wordpress.com/2018/07/04/cam-from-women-march-on-washington-by-christine-kallman/. Character name is Cam (they/them). The scene is roughly in the middle of a full-length play (in development) entitled Women March on Washington. It received a reading in the spring of 2018 in Northfield, MN, with actors of diverse age, race and gender.