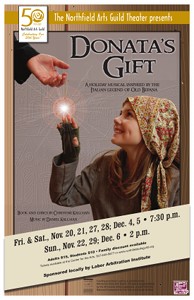 Donata’s Gift is a family holiday musical based on the Italian legend of Old Befana, with roles for children and adults.

The story draws its inspiration from the Italian legend of Old Befana, the folk tale benefactor who showers Italian children with gifts at Epiphany. See synopsis.

Donata’s Gift was premiered at the Northfield (MN) Arts Guild Theater in December of 1998, and performed there again in 2009. The 1998 production was supported in part through a grant from the Southeastern Minnesota Arts Council.

Donata’s Gift, a musical for the holiday season, draws its inspiration from the Italian legend of Old Befana, the folk tale benefactor who showers Italian children with gifts at Epiphany.

In this original story, Donata is a lonely and bitter old woman in a small sixteenth century Italian village.  Although it is the Christmas season, the villagers are foolish and bickering, and Donata, who is merely eccentric, is whispered to be a witch.  Then, due to a mistake by the bumbling and forgetful Sister Roma, Donata is openly accused of stealing the altar candlesticks from the cathedral.  Signor Alfredo, the scheming but gullible master of the orphanage who would like to impress the Constable in order to get a better job, sets out with his bullying sons, Antonio and Lino, to prove Donata guilty.

But Alfredo and the town are turned upside down by the arrival of two new orphans, Lucia and her little brother Niccolo.  Despite the poor circumstances of the orphans and Antonio’s threats, Lucia is not afraid to raise the hopes of the orphans that Old Befana will come with gifts and leads them in celebrating the Christmas season right under Signor Alfredo’s nose. Nor is Lucia shy in pestering Donata to assure her that Old Befana really will bring the gifts, although the girl’s hopes are dashed when she also becomes a suspect in the theft.  In a dream scene, the Magi visit Donata just as they visited Old Befana in the legend.  Their presence calls her to put aside bitterness and spread the gifts she has, just as Old Befana brought gifts to the Christ Child.  Donata is afraid, but finally becomes convinced, in the song “Our World Needs This Child.”   On the morning of Epiphany, the orphans find that Old Befana has brought them all gifts.   Donata and Lucia are exonerated, and even Signor Alfredo cannot remain unmoved as the story closes.

Humor permeates the play, from Donata’s clever outwitting of  Alfredo by pretending to call back his dead grandmother, to Sister Roma’s fainting spells, to Alfredo’s self-important reflection on fatherhood in “Advice Song”.  Other songs emphasize the play at appearances: the villagers’ pretense of getting along (“Peaceful Life”),  Niccolo’s humorous show of power (“You Look Out”), and Donata’s icy exterior which masks a terrible longing (“Donata’s Lullaby”).  But hope predominates, in the orphan’s joyous invocation of Befana (“Hurry, Hurry”) and the villagers’ attempts at a new start (“Something Good Will Happen”).

September 2021: “Remembering for You”, Christine’s poem looking back at the year 2020, was included in an anthology entitled This Was 2020: Minnesotans Write About Pandemics and Social Justice in a Historic Year. The collection, published by the Ramsey County Library (MN), won the Minnesota Author Project award in the Communities Create category. The book is available from bookstores, or can be read free at:  https://mlpp.pressbooks.pub/thiswas2020/

January 2021: A new radio play by Christine is now featured on radiodramas.net, a recently launched web destination for radio scripts for all ages. The Mad Adventures of Mavis Montero: Mummy Mania is the first in a series that Christine will write for middle school and older.

April 15, 2020.  Christine read her poem  “Beyond Sight”  on the Northfield (MN) Public Library Instagram feed. This poem was one of the winners of the 2014 Sidewalk Poetry competition in Northfield, Minnesota.

April 13, 14, and 20, 2019, at the Broad Institute of MIT, Cambridge Main Library,  and Peabody School (Cambridge, MA) : “Earthrise” and “Einstein-Rosen Bridge Strut,” two songs with lyrics by Christine Kallman and music by Daniel Kallman. The songs were performed as a part of One Whole Step for Man: Songs of Space Travel.

Friday, March 1, 2019. Christine was invited to read two poems, “The Garden” and “The Most Difficult and Best” for Writers Night: Resilience and Sustainability, a juried event at Content Bookstore in Northfield, MN.

Christine had a monologue published on the website Non-Binary Monologues (Monologues for Non-Binary Actors) https://nonbinarymonologues.wordpress.com/2018/07/04/cam-from-women-march-on-washington-by-christine-kallman/. Character name is Cam (they/them). The scene is roughly in the middle of a full-length play (in development) entitled Women March on Washington. It received a reading in the spring of 2018 in Northfield, MN, with actors of diverse age, race and gender.